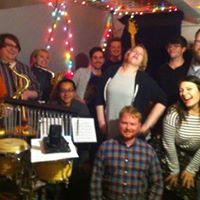 Funk Summit Bass Team is a giant funky squad of 11 of Cream City’s finest. We are dedicated to bringing you the latest and greatest in live funk in Milwaukee!

Porky’s Groove Machine is the intergalactic ambassador of the Midwest’s silliest nerd funk. Since forming in the fall of 2011 in Appleton, WI, we’ve spent the last five years playing around Wisconsin, touring the Midwest and East Coast twice, and even opening for Guster at Indianapolis’s Old Egyptian Room! With a three-piece horn section and an auxiliary percussionist on top of a traditional rock rhythm section, our sophisticated musicality and not-so-sophisticated humor has been described by Julian Loida of WIUX (Bloomington, IN) as “the vibe of the B-52s and the Flaming Lips combined with the sound of Phish, G. Love and Special Sauce, and New Orleans music.”