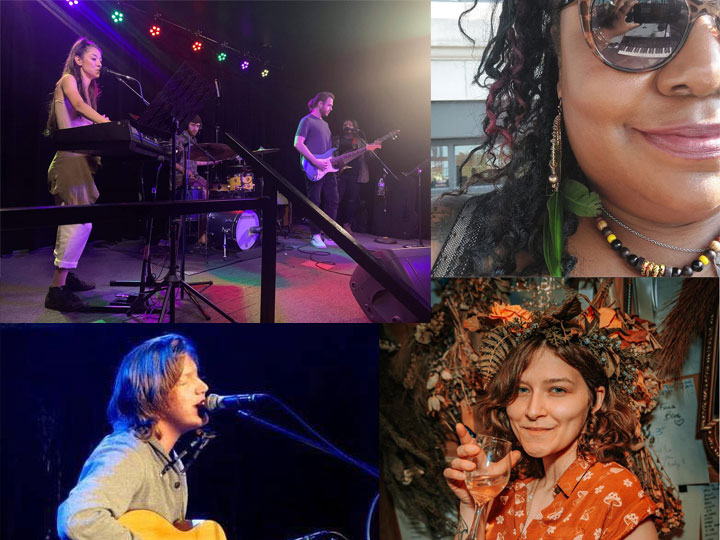 SSAANN is a Milwaukee, WI artist whose “Synthesizer, visceral lyrics, relaxed vocals & mellow rhythms give listeners a time to reflect on the present & feel grounded within the search of ultimate balance.”

The Milwaukee based Chris Haise Band‘s (pronounced Hi-zee) music is a blend of hook filled ballads and toe tappers. Mixing Folk and Rock, Haise’s vocals have been described as Dylan meets Springsteen meets Petty, while his lyrics have been described as “smart new songwriting” and “Intense, Thoughtful Songcraft”. In 2017, Chris Haise released his solo album entitled “Your Ugly Friends” which was nominated for 88Nine’s Music Awards for Album of the Year, Independent Release of the Year, and Solo Artist of the Year. He was also selected as NSAI “One to Watch” along with winning Dylan Days Singer/Songwriter Contest.

Karmon Blu – With over thirty years in the music business, it is Keshena The Artist’s staying power and vocal prowess that has sustained her. The trained musician – who got her start in the church like most legendary singers do – is a self-taught instrumentalist and soul singer at heart. And better believe, she is as versatile as she is soulful. Keshena The Artist has sung everything from folk to blues and rock n’roll, and has studied music theory and performance, and jazz vocals under the tutelage of Adekola Adedapo and graduated from MATC’s music occupations program.

ANDII wasn’t supposed to be a musician—not if the scatter-brained, ten-year-old version of herself had anything to say about it, that is.

Growing up in a family of vocalists, ANDII was drawn to visual arts, literature, and science instead. The very first thing she remembers wanting to be was an archeologist, in fact. Music, while ever-present in the way of hand-me-down guitars and long-forgotten lessons, wasn’t something she imagined she’d ever be good at.

At 15 years old, however, she learned that her hearing would be lost in the matter of a few short decades due to a genetic anomaly. Unsure of when she might lose the gift of sound, her desire to author music intensified. She taught herself the basics of guitar, leaning on the distant memories of lessons she’d taken previously. She first learned songs by some of her favorite artists, building an understanding of songwriting and storytelling, until she finally broke away and began writing her own material.

More than a decade later, ANDII has written dozens of songs about life, love, and loss, and there simply isn’t any path that makes more sense for her than that of musicality and vulnerability.