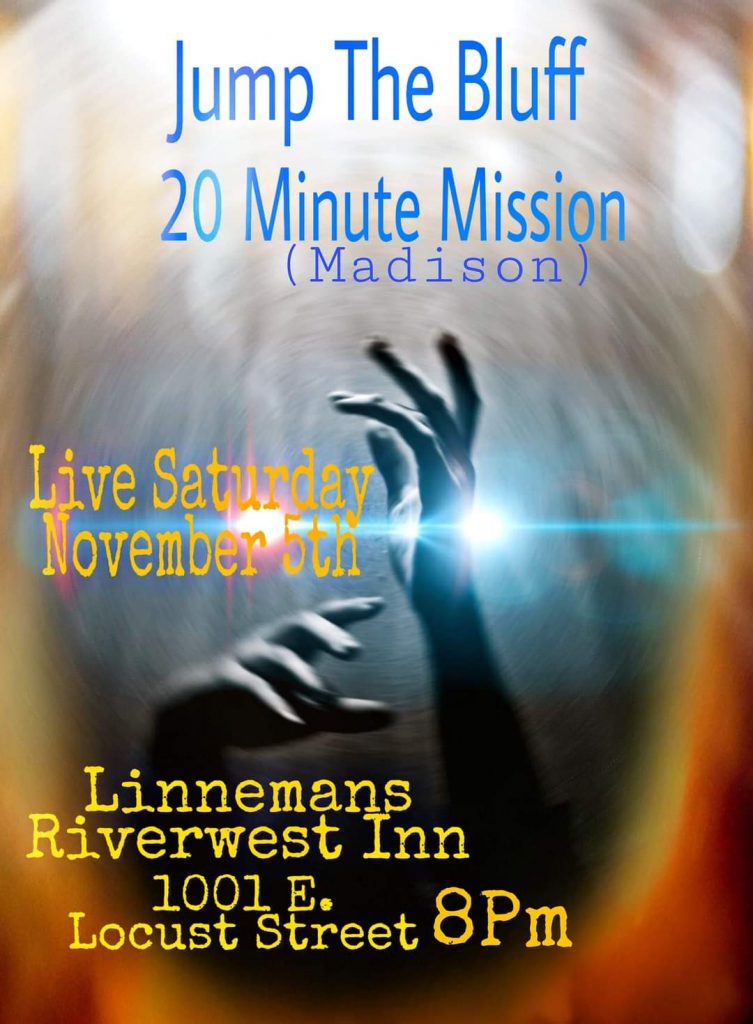 Jump The Bluff is a 4 piece Punk pop/Power Pop, Rock N’ Roll band. Established in February 2022 and veteran Milwaukee musicians. The band have made a connection writing infectious songs that are very catchy and easy to listen too. Influenced by 70’s post punk, 80’s New Wave and 60’s Garage rock. The band hoans their sound on melodic guitar melodies and a groovy rhythm section. Jump The Bluff have a couple of shows underneath their belt and will be hitting the studio this Fall to work on their debut lp. 20 Minute Mission is a trio that calls Madison, WI home.  With diverse influences and playing styles, the group has brought an unique and refreshing aspect to punk rock/post-punk/alt rock music by meshing styles and abandoning stylistic dogma.  Not confined by established roles, the members of the band actively switch instruments from song to song and this shows in the diversity of sound that is 20 Minute Mission.

Drawing from their previous work: Mike (various regional bands from Buffalo), Steve (Billingsgate-from Chicago) and Joel (Rhinelander-from Milwaukee) have now all landed in Madison, WI and have combined their tastes and abilities into something that is their own. Not letting Covid detour them, 20MM has recorded two EPs while in their bubble; the first was a self-titled, 8 song CD released in the  summer of 2020 and they just finished recording at Audio of the Arts  (located in Madison, WI) and will be releasing “Down on Ruskin St” at the end of February 2021. The song 29 Palms, off of the self titled first EP, came in at #7 in Maximum Inks, New Year Eve poll of the top 41 songs for 2020 in southern Wisconsin.